First Swim--Time Out From Panic 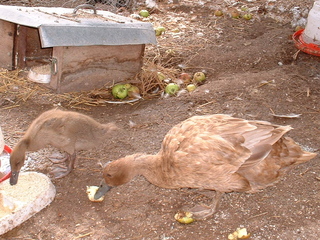 I planned carefully, so Ms. Khaki wouldn't panic while "we" took baby duck Puddles up the hill to the stock tank for his/her first swim. I asked Kiebler and Ms. Ritz to go in a bit early from their morning swim. Then I opened the wide door to the nest box from the outside, set up a miniature ramp to the ground, and ushered Ms. Khaki and baby into the nest so they could see their new exit. They didn't. They didn't rush into the scary world outside.

I waited. No go. Finally I picked up baby Puddles (who needed a bit more handling to accustom him to it, in case of need some day). When I held him outside, Ms. Khaki rapidly followed. They paced around the pen a bit. Mom was obviously distressed at finding herself in the yard with her offspring. Then the urge to graze took over. She dug in the weeds for a few moments, worried again, paced around the pen again. I kept pointing and repeating, "Go swimming. It's okay," trusting to her knowledge of English.

Something told me to keep my distance, and soon Ms. Khaki spotted the path to the stock tank. She took off, Puddles following behind. She had to do it herself. I could see her brain self-organizing around the idea, "It's okay. I've been here many times before. A swim would be nice for us both." If I had tried to lead or usher her there, the worry would have taken over, smashing the comfortable circuits of her own experience.

Ms. Khaki and Puddles enjoyed a brief swim, a few dabbles of mud, then hurried back down the path to the security of the pen--not in through the new ramp to the open nest box. She went to the familiar pen gate. Given enough happy swims, the ducks might learn the new route--or not. Before that happens, Puddles will probably be large enough to join the flock. 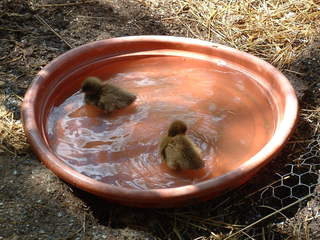 Eventually that first day, they got sleepy and managed to convince Mom to sit down so they could disappear under her wings for a nap. Then one caught a fly,  Read More 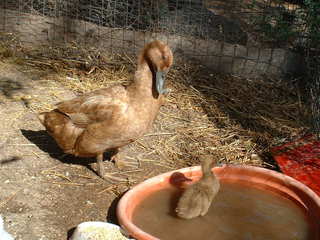 For August 21--on vacation
It was a good week for the ducklings, until Sunday, when Mudsy came out of the nest looking like the same fuzz ball she had been all week. Her nestmate bounced out looking like a miniature duck. Something was wrong.

Mudsy sat around all day, took refuge in the tiny nest box near their small pond, got caught behind a brick when thunder scared her, was rescued when Mom got excited, and I put her into the nest box, where she remained to die. Her crop seemed full and she refused to eat, just drank and swam and waddled a bit here and there during the day, then napped away her life.

Mom Ms. Khaki came out of the nest box at dusk to tell me something was very wrong, and I buried Mudsy in the family hillock How could such a perfect little creature be dead? I had such high hopes for her when she survived a full peeling, able to peck only a small hole in her shell at 28 days. Maybe she wasn't as perfect as she looked. Life is one of the most complex miracles in nature; when it works we are awestruck, thanking Creation for such an intricate schedule of self-organizing biochemistry and physics. 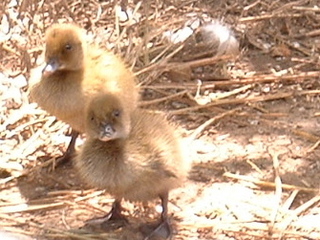 The next morning, fearing the worst, I opened the access door to the nest  Read More

Waiting for Ms.Khaki's eggs to hatch out 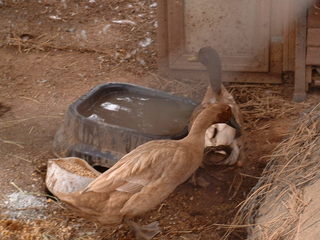 So far so good, except I think there are more chicken eggs in the lot. I fixed the fence so Gwendolyn couldn't get in and steal the nest, but chickens are remarkable gymnasts. Five feet mean nothing to their pogo stick legs. Someone should start a chicken polevault event at the next state fair. I still haven't figured out how Gwen gets into Ms. Ritz and Kiebler's pen. She can't get out after she lays her egg in Ms. Ritz's nest.

Another good jumping chicken was Peeky, who sat on twelve eggs, not just eight, for the allotted 4 weeks. Read More