Good Mothers--Sharing Among the Birds

One spring, when I decided my granddaughter need to experience the miracle of baby chicks, I innocently went back to my Silkie breederfriend, who admitted he had two broody white Silkies he wouldn't mind getting rid of. They were the hens that serially adopted a mixed brood of turkey and chicken chicks and suffered two bear attacks after the Cerro Grande fire in 2000 C.E.

One of the broody white Silkies I adopted had been badly beaten up by other hens--the inevitable fate of the lowest hen on the pecking order. After the fire here in 2000, when a hungry bear demolished the wooden crate nest box and enjoyed a fluffy white chicken dinner, the second beat-up Silkie took over the remaining turkey (now called Little Bear by the granddaughters) and two chickens. No problem. She braved the second attack, when the bear failed to open the sturdy nest box hastily built by Uncle Don. The bear rolled it and broke down two fences in the birds' enclosure, but didn't flinch when this little old lady (me) came running down the hill with a flashlight. Thank goodness the dogs' doors were open. The bear quickly retreated when they came flying out. Mother Fluffy appeared the next morning clucking protectively over her 3 chicks. No problem sharing. Of course, chic

Is there a less in here for us somewhere. Probably not, but do take a look at the Christian Science Monitor article on sharing in the October 1, 2012 issue. There's a lot of good sense in sharing--a start on the path toward a more sane approach to using but not using up our resources--a theme in my novel THE WEBS OF VAROK, about to launch Dec. 4. The excerpts are online at ArchivesofVarok.com, with giveaway opportunities there and on my blog on Goodreads. Cheers, Cary

"You don't happen to have an extra hen or two?" I asked the friend who had taken Dexter the rooster. That poor, beat-up beauty had stimulated the effect that chickens have on some people--I had to have some again, as pets. "Sure," my generous friend said. "People are always asking me to take the hens they can't keep." So I brought two home with me.

Roosters were not allowed in town, but you could keep most other animals 100 feet from the "human dwelling" if they were not "livestock," whatever that meant. Now that I had two dogs to guard them, I could have chickens again. They would be kept safe from the neighborhood raccoons and cats. With Dexter happily boxing it out with his host rooster, I gleefully loaded into a holey cardboard box two "rescue" birds--an old red hen and a striped Araucana, who promptly laid a continuous supply of green eggs. Later I learned that my generous friend had been led astray by his dedication to the breeding of white Silkies. His wife never forgave him for giving away her best layer.

Amplification they call it, in some books about complexity. The fact that when a lot of things are connected and act in nonlinear ways, a small change can trigger events that trigger other events until huge changes occur. Marketers would love to know how this works. How did Harry Potter trigger such a following? How does a small virus in a big ocean trigger a disease that changes the world? That's another story yet to be copy edited and set into design. And how did the Hen House come to be the home of 2 chickens, 2 geese, 1 turkey, and 4 ducks--when I didn't want more ducks. They're very messy and a lot of work with their dabbling--eating mud and washing it down, but loving clean water.

It all started with Dexter, a young rooster who needed refuge from a dominant cock who ruled the roost on a small farm twenty miles away.  Read More 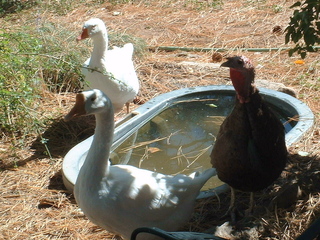 Bobbi, Lucy and Little Bear at the stock tank pond.

Watching the Hen House gang on a sunny fall day, the sky bluer than blueberries, the air just cool enough, the birds--all of a different feather--grazing peacefully . . . Oooops!
The newly grown baby duck Puddles came a bit too close to Bobbi goose. A warning nip on a stretched out neck, and Puddles backed off to flock with mom and dad. Then one of the hens decided the ducks must have found something yummy. "Too close, ma-am." The message was clear.

What was striking was the overall structure of the flocking behavior--peaceful togetherness with subtle segregation for those not of the same feather. Ducks swim together. Geese swim together. And they take turns. But I've never seen one of each kind of bird together in the small stock tank pond. Self-organization of a very subtle kind.

Watching all this from the bench overlooking the yard, it made me think of the US Congress--two mind sets that can't swim together in the small pond of today's outdated assumptions. Is this the current expression of human tribalism? The failure to listen? The failure to share the pond? Isn't it time to learn to graze together on the reality of limits and find shared values? It's time to reconsider--just about everything. Time to outgrow our tribalism and share concerns.

In his book Anasazi America, David E. Stuart illustrates the point that energy efficiency in a society trumps power and growth, when it comes to surviving for the long term. The implications for our current addiction to overproduction are ominous.

I don't mean to subtract from the importance of this idea for our future, but I think a few thoughts from the Hen House might be interesting to consider. 1) Chickens are very efficient nibblers. They can spend all day roaming around the yard, pecking at this and that--it's hard to tell what--and coming home to roost perfectly satisfied, leaving their dish of high-tech lay pellets untouched.  Read More