Bullsnakes--Friends of the Hen House 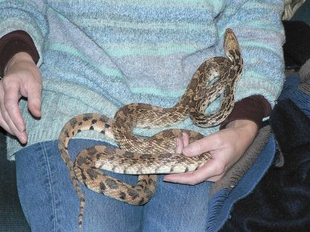 I could use a few more bullsnakes. (We called them garter snakes in California.) A lovely long one lives under the dog igloo where Kiebler and Ms. Ritz reside, but he has not been able to keep up with the mouse population, now that they have learned not to drown in the ducks' bathtubs.They scamper away into the ground when they hear me filling the water tubs. They don't bother anything, and they don't eat more than their share, but it means I have to be careful how I handle things. I don't want to encourage hanta virus.

This Friday the Los Alamos Daily Post will publish my column about the rattlesnake we met while working on a Seismosaurus dinosaur site here in New Mexico. As a result, I heard from Jan Macek, who has published her snake rescue stories on Animalrescuechase.com. Here is her bullsnake story from that site. Her "rattlesnake" story appears as a comment on today's other blog, below.

"I should explain that I have a great love for reptiles especially snakes and do free educational snake programs. Snakes, especially in New Mexico, and elsewhere, don't have much of a voice so I try to give them one. Early Nov. 2010 I got a call from a lady who told me that her kids had found a snake stuck in a hole. When we got to the site, sure enough, there was a bullsnake head protruding from a hole. Somehow, a bullsnake had gotten into a gopher hole but for some reason, the hole had caved in and the snake couldn't get out. We live in the mts of NM and the nights were getting cold so if this snake hadn't been rescued when it was, it would have frozen in the near future. When I dug the snake out, I discovered a very skinny bullsnake about 5 ft. long. I have had him for almost 5 months and he will not eat on his own. I have had to tube him with turkey babyfood to get this system ready for food items. He will not eat on his own so I have had to assist feed him with large (frozen/thawed) pinkies and fuzzies. I am hoping he will eat on his own in the future. I am not sure what happened to him but I suspect that he was someone's pet for many years and then he was let go and couldn't fend for himself. I had been hearing about this large bullsnake all summer and it is strange for so many people to see the same snake in the same area all summer. I should have known that this is not normal for a snake. I don't know if he will survive but I do know that if he does, he has a forever home with me. This picture was taken right after he was rescued. He looks the same after 5 months because one can"t stuff a snake in order for them to put on weight quickly. It has to be done slowly. Reptiles, deserve the same compassion as we give our 4 legged pets."

Sadly, this bullsnake passed away almost 2 years to the day
that he was rescued. He never would eat on his own and I could only get him to eat small prey items when he should have been eating adult mice. He had a good life; he was loved and cared for and kept warm and he was surrounded by others of his own kind when he died. He didn't die alone or under any stress. I wish people would realize that snakes are much like dogs; they feel pain and they have distinct personalities. They can get cancer and broken bones and many snakes that I have are so affectionate. Snakes protect us against the hantavirus and also the plague that we can get from rodents. To me having a snake around my property is like having a little angel that protects me. If you don't want snakes in your yard or if you have a rattlesnake, you can call the police dispatcher at 662-8222 to have it relocated.