Buy now--#1 in the series--The View Beyond Earth
Buy Award Winner --book 2--The Webs of Varok
Buy now--book 3--The Alien Effect
The Archives on Amazon.com
Goodreads

For four weeks in 1975, Peeky, a mixed-breed hen, sat in the hen house on twelve eggs, resting on straw in a 12 by12 by 1 inch frame. Over her objections, we made sure she got up each day to eat and poop, and we used the time to turn and spray her eggs. Shell membranes can go dry and tough in a climate with single-digit humidity. Read More

New Musical "Petra and the Jay." Book by Cary Neeper. Music by Alice B. Kellogg.

In the far far future (3020C.E.) a young woman with an identity problem defends the personhood of her extraterrestrial and Earthly animal friends, as humans tackle their most difficult challenge--a conference with friendly aliens to discuss solutions to overpopulation. Read More 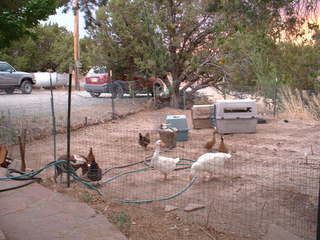 How did we get into this pickle? The Las Conchas fire was running toward town, and we had ten birds and two dogs to evacuate.

We'd already had a fire, in the year 2000, but all we had to evacuate then was a turtle, a plecostomas and two swordtails. They didn't like being evacuated, but at last I convinced them to stay in the largest salad bowl I could find--all but the male swordtail. I couldn't catch him, and time was ticking away too fast as a huge plume of bright black, orange and white smoke rose overhead. It broke my heart to leave him behind. We spent five anxious days glued to a TV set in a friend's house in Santa Fe, while our aquatic dependents swam around in a cooler on the front porch. The second week we took off for our daughter's home in St. Louis, while a generous pet store housed turtle and company. More than 400 homes were lost in that fire, but an alert helicopter pilot spotted a burn opposite our canyon and saved our neighborhood. When we arrived home, we found the male swordtail hale and hearty. The female promptly delivered hundreds of offspring. Some fish do that, a lot.

This June the fire gave us no alternative. It came at us with even more fury, lapping up the dry forest with fifty-mph winds. (We hadn't had any rain or snow since October--just six-inchers--five-minute storms producing raindrops six inches apart.) We had to evacuate ten birds, the two dogs, and my string bass. How were we going to convince the welcoming casinos to house us all? "Hey, I've got a Ph.D., like everyone else in Los Alamos. I'll guarantee the good behavior of my two geese, one turkey, three chickens and four ducks. You have a nice pond in your lobby, don't you?"

With some circling and pouting, the dogs settled down with my string bass in the Pontiac Vibe. We had two dog crates, a small and a medium, for the 4 ducks and 3 chickens, and--thanks to our neighbors--one very large dog crate for the two geese, and turkey (named Little Bear because she survived two bear attacks-but that's another story). They fit into the bed of our half-ton truck with at least two millimeters to spare. All together we had enough room for a few irreplaceable paintings and one box of family memorabilia.

Just before we left, the phone rang. The same friend from Santa Fe offered his home as a refuge. Luckily, he had moved out of town and a rabbit had decimated his garden, so the birds were welcome to spend their days in his luxurious thousand square-foot yard, partially shaded all day long and inexplicably enclosed in a five-foot-high fence. All I had to do, as I pushed the crates around, was not leave them too close to the fence. Hens are good escape artists. They can fly short distances and hop with the agility of a pole-vaulter. The birds slept in the crates at night, secure from the local coyotes, and, with some encouragement, agreed to lay their eggs in the mid-sized dog crate. We made a quick trip into Santa Fe, ignored the art shops, and bought straw for the birds' bedding and oyster shell for their gizards. The birds' dirty straw provided mulch for the host's other garden--the one in the patio that rabbits hadn't found. The birds caused great excitement in our host-dog Hibber, until he realized they were just part of the pack, and no fun, being unchaseable in the pen. A few well-timed bribes smoothed over the gap in feeding times between our dogs and Hibber, who seemed to enjoy having a small pack of friends along for walks in the juniper-pinyon forest.

We enjoyed a worry-free week, while 156,000 acres burned near Los Alamos, destroying private homes in the Jemez Mountains and a good part of Bandelier National Monument and the Valles Caldera National Preserve--warm days reading on the porch of a cool adobe house that had once belonged to Jane Fonda. Feeling thankful for good luck and good friends, we were intensely aware of helicopters and slurry planes passing overhead in the smoky skies--reminders that dedicated firefighters were hard at work keeping the damage to a minimum.

While following the truck home, I could see the geese in their crate, looking this way and that, their necks straight, heads high, wondering why the world was flashing by so fast. Every quarter mile or so another goose feather or piece of straw flew from the crates and bounced off my windshield. Once home on their half acre of ponderosa forest, the birds resumed their routine as if nothing had happened.

While we were gone, some hungry animal had found a neglected egg in the duck's nest. Maybe the tubs of water provided someone with relief from the drought and the fire, but the water shone with a chilling film of oily ash-fall, which also stained the pavers in back of our house.

The evacuation had been miraculously easy and comfortable, but how did we get into this pickle in the first place? Urban chickens are increasingly popular now, but turkeys? Geese? And ducks? Even if I charged $1.50 per goose egg, it would still be an expensive hobby. The hen house began turning in 1975, when husband Don built it to for our youngest daughter's eighth birthday present--four hens and twelve fertile (?) eggs.

To be continued.
Read More

A Place Beyond Man--The Archives of Varok

This book was written in 1973 or so, published in 1975 by Charles Scribner's Sons, Dell and Millington, London and is now back in print as an Authors Guild Backinprint.com Edition. Its sequel is updated with current ideas about steady state economics and complexity and will be available in 2012. The others will soon follow.

When we confront intelligent life unlike our own, how do we react? Inter-species contact plays against a backdrop of Earth confronting its limits.

All five books of the Archives of Varok are set in an alternate solar system that includes 21st century Earth and her undiscovered neighboring planets--Ellason (Which is plummeting toward Earth on its eccentric way to perihelion) and Varok (A hidden moon of Jupiter populated by marginally conversant mounts built like monster kangaroos, tiny light-hopping mystics, box kite-shaped insectoids who enjoy a good insult, right-brained, intuitive great-fish, the emotionally volatile ellls, and varoks, who learn the hard way about trust, faith and espionage.