Revisiting Schumacher's Small Is Beautiful—Economics As If People Mattered

Part II. In Defense of Science

On one point I have to disagree with Schumacher. He reacted to Sir Charles Lord Snow 's cry for education in science in order to avoid the split between scientists and literary intellectuals. The trend then was toward over-specialization. Also, the defense of science as neutral apparently enraged Schumacher, in the face of nuclear weapons development.

Revisiting Schumacher's Small Is Beautiful—Economics As If People Mattered

Part I. It's Even More True 38 years Later

In 1975 this book made a huge impact in the U.S. on how we thought about our control and overuse of the natural world, inspired the Intermediate Technology Group in the UK, and initiated global concern about resource depletion.

In 1989 it was published again with extensive Prefaces by John McClaughry and Kirkpatrick Sale, who outlined its still relevant themes besides resource depletion: over consumption, human domination, the need to say "enough," the importance of human scale, the need for fulfillment in work, the needs to be close to nature and to live a good life, and the failure of traditional economics to take these factors into account when advising policymakers.

The Previews pointed out his weak points—his focus on greed, an unsupported attack on nuclear energy and a narrow Bertrand Russell view of science, and a naive view of government ownership and socialism.

However, his other teachings are even more significant in 2013, 38 years later, and are reflected in current statistics outlined in a concise text by Rob Dietz and Dan O'Neill, Enough Is Enough: Building A Sustainable Economy in a World of Finite Resources, in a detailed review of our current horrific situation by Brian Czech Supply Shock , and a confirmation of our danger in Richard Heinberg's The End of Growth.

Meanwhile, the work of the Schumacher Institute continued and refined its approach as have the views of Herman Daly and steadystate.org. The book Gaian Democracies by Roy Madron and Joy Jopling worked well as a text for a sustainable solutions course the University of New Mexico in Los Alamos, for it aptly applied complexity theory to the problem of redefining current economics for a full Earth. Other approaches incorporating the impact of economics as complex systems include the small book The Gardens of Democracy by Eric Liu and Nick Hanauer and the award-winning fictional approach in The Webs of Varok and its series described at Archives of Varok.

A few quotes from Small Is Beautiful make the salient points in verbiage we deny at our peril, for Schumacher's concerns have only grown more urgent:

Page 21 "...the modern industrial system...consumes the very basis on which it has been erected."
Page 31 "...the idea of unlimited economic growth...needs to be seriously questioned on at least two counts: the availability of basic resources...[and] the capacity of the environment to cope with the degree of interference implied."
Page 34 "...Gandhi said, that 'Earth provides enough to satisfy every man's need, but not for every man's greed."...what were luxuries for our fathers have become necessities for us."
Paage 45 "...the fragmentary nature of the judgements of economics...give vastly more weight to the short than to the long term...[and] are based on a definition of cost which excludes..the entire God-given environment.
Page 48 "...cost/benefit analysis...is a procedure by which the higher is reduced to the level of the lower and the priceless is given a price...what is worse...is the pretence that everything has a price...that money is the highest of all values.
Page 51 "[Economists assume that]...growth of GNP must be a good thing, irrespective of what has grown and who, if anyone has benefited. The idea that there could be pathological growth, unhealthy growth, disruptive or destructive growth, is to him a perverse idea..."
Page 66 "...it is not a question of choosing between 'modern growth' and 'traditional stagnation.' It is a question of finding the right path of development, the Middle Way between materialist heedlessness and traditionalist immobility..."
Page 108 "Among material resources, the greatest...is the land...the land carries the topsoil, and the topsoil carries an immense variety of living beings including man."

Aging in the Hen House and Elsewhere 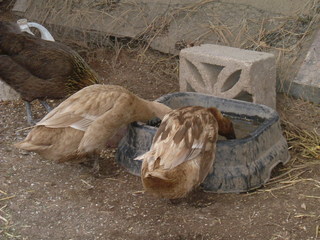 Gwen and Puddles in her maturity

What has the Hen house been telling me lately? Something about aging, I'm afraid. Should I blog about aging? In this culture? Maybe. But I'll do it anyway.

We're all aging, aren't we? Turkey's knees are thick with rough scales, and she has quit whining for her flock, content to hang out with the geese and chicken. Lucy is still a beautiful fat white goose, but she laid only a few eggs this year. Baby duck Puddles, now one year old, has sprouted lovely dark brown patches in her feathers. She is still laying one egg each day, more than her mother Khaki.

And the miniature Mallards, Kiebler and Ms. Ritz, can no longer fly all the way up to the stock tank for their morning swim. Even so, Ms. Ritz is sitting faithfully on several eggs I neglected to collect. I haven't the heart to take them away. Maybe they'll hatch. She's a good mom, but the Hen House is quite full enough. I don't know what I'm going to do.

What do I do if they don't hatch? She once sat for eight weeks on eggs that didn't make it while we were on travel. That's why I got her Meatball, a broiler, the only chick in the feedstore.

Back to aging. The dogs hips are arthritic, but they don't complain, like the rest of us. We're cutting back and looking for end-of-life options, so we don't leave a huge legacy for our children to cleanup. There are many different options for elder care. Most people wait too long, then move when they have to--when there's no time to make a comfortable choice. Here's a few links to start working on it. NACCRA or a 2010 overview

Our problem is that the Hen House birds could easily outlive us, and most Life Care campuses don't allow geese.

The Brain Is Most Complex

The human brain has been called the most complex object in the universe. It deserves that title because its neurons have so many connections to each other. Suns and galaxies are relatively simple, with billions of objects interacting with fewer nonlinear options. The many types of neurons are not alone in the brain. They are enmeshed in a complicated arrangement of fine connective tissue and fed by a vast network of blood vessels and hormones. Recently we have discovered that they can grow and invent needed pathways. In the 1990's my daughter did her master's thesis showing that the neuronal growth hormone in rats spiked after nights of running on its exercise wheel.

Very interesting, but the point here is that brains, even small ones, are not simple. And they are not all the same. Birds, at least scrub jays, have a special lump of brain tissue that remembers where thousands of peanuts are hidden by our front porch. An entertaining read is Colin Tudge's The Bird .

Another case in point: though my Khaki Campbell ducks can't remember to go around the fence to exit the pen if the opening is not visible, they never forget that I'm the person who digs red worms for them. I suspect that evolution—selection working with the complex phenomenon of self-organization in the brain—has provided living creatures with a genius for finding and selecting good food.

Temple Grandin, in her new book The Autistic Brain , emphasizes that every autistic child is an unique case to be treated with specific care and directions. Behavior patterns labeled autism present a continuum of abilities and unique talents. Labels that categorize symptoms limit the imagination and endanger the treatment by those responsible for the care of individual lives.

We humans are addicted to simplifying. We lazily shelve ideas and concepts whenever we can, applying oversimplified definitions and questions to living beings, like when life begins. Every aspect of life is a continuum, a hierarchy of ongoing complex systems at many levels. Nature doesn't do categories. Though useful for organizing our thinking, they do not serve us well when we confront reality.