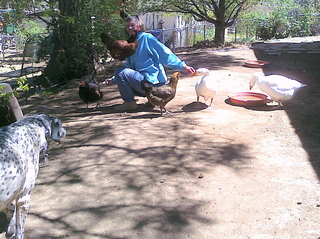 When our first chickens arrived in a cardboard box forty years ago, we had already adopted Poncho. As a "Santa Fe Shepherd," his instincts were just about right. He helped us herd the chickens back into the pen for the night. (Chickens don't herd, but that's another story). We didn't try to train Poncho as a sheepdog, but we did train DeeDee and Scooter, pointer-heeler shelter dogs we adopted after the 2000 fire in Los Alamos. They were natural born hunters, but once convinced that little chicks were part of our family pack, and after I taught them a few herding commands, like "back" and "leaveit," they made reliable bird-sitters. Of course, I close the doggy door to enforce their working mode, "watching" the turkey, two geese, three chickens and four ducks. I lock them out because they slept through the coyote attack in broad daylight that did in Meatball. (But that's another....)

They do pretty well now. At least they're able to distinguish the crows I holler at--waving my arms and rushing down the hill--from the chickens and the English call ducks I feed and call "sweetheart." Luckily I was close by when the ducks first flew up from the pen to the stock tank, triggering the dogs' catch-em mode. It was too tempting, too much like the tweety birds they like to smoke out of the nearby bushes.

DeeDee and Scooter are both very reliable when it comes to not biting off chicken heads they're supposed to be protecting from coyotes--even when the hens try to steal their dog biscuit rewards for bird-sitting. I wish I had a video of the time turkey, "Little Bear," decided to nip DeeDee's ankles. Here was this 20-pound turkey chasing a sixty-pound dog around the chicken pen, DeeDee turning her head back every few feet with a timid "Gr-r-r-r ", until I rescued her. She got the praise she deserved for Great Restraint. Turkey got a scolding, which didn't do much to enhance our relationship.