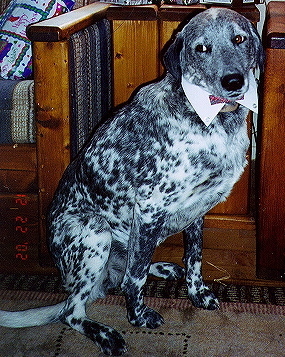 This picture tells it all--almost. Guess which one is the alpha dog, which the beta? In late 2000, it all came to a head when I bought DeeDee and Scooter a dog food container with two bowls on top, one serving as the lid to the storage chamber. The dogs were half grown, and DeeDee had declared herself the boss. Scooter could not be persuaded to eat next to her at the new bowls. I tried feeding Scooter in the kitchen, but then she felt abused, separated from her sister, and wouldn't eat. Enough already. Wasn't I the ultimate alpha? I decided I wasn't about to feed the two dogs at opposite ends of the house. Scooter would have to feed next to her alpha sibling. It took some persuading. I soon discovered that I had to reward DeeDee, who woofed down her meal in a hurry, for waiting until Scooter finished her self-effacing, slow, glance-up-every-minute feeding. You can see the look in her picture on the right, taken at age two.

Oddly enough, Scooter is the one who has always been in the lead while exploring the canyon behind our house, or anywhere else in the woods. Alpha DeeDee runs behind her, checking out the smells Scooter finds. However, DeeDee is the one who first spots the coyote bone caches and brings parts of deer home on nearly all our hikes in the woods. As she got older, she learned to leave them beside the trail, to be picked up on our way out to the car.

The alpha/beta contest has never seemed to apply to care giving. Each will ask and receive an ear clean out, or other attentions that keep dogs clean, on request. They are both female, but that hasn't made a difference that I can tell.

The differences in their intellect is striking. DeeDee is the smarter. She gets it when I say you are "off today, no bird watching" hence no special treat. Scooter always looks for the treat, stuck in the daily a pattern or always hopeful or both. DeeDee doesn't sneak or cheat, like leaving poop on the upper lawn when I'm not looking, but Scooter does. They both did very well at puppy school, and both earned their Canine Good Citizen tag. Though DeeDee was the more difficult one to train because she was so interested in other dogs and the smells all over the training shed, she is the one who remembers the training very well. Actually, both deserve their medals for watching the birds and and chasing crows out of the yard and for not snapping turkey's head off when she tries to steal a bite of meat off the dogs' treats.

Both dogs were spayed when I got them at three months, which is way before their bones had capped off--a fact that cost us $2000 and DeeDee a lifetime of pain (but that is another story for another day).